Homogenizing the Herd: Real Milk and Your Health

Tomato seeds were splattered wall-to-wall in my mama’s kitchen. 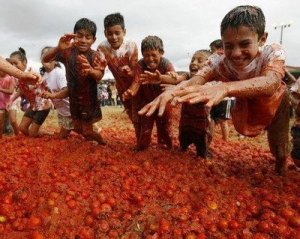 I forget who threw the first ripened bomb. I think it was my cousin. We’ll blame him anyway. What ensued after the first splatter was the tomato battle of the century. All six siblings and cousins launching red, juicy fruit at high speeds. Half of us were inside the house and the other half in the yard.

My uncle had acquired a truck load of tomatoes from the farmer’s market. (We still have no clue how he thought we could eat, can, and preserve that many tomatoes.) Both sets of parents happened to be away that day – and the truck’s evil payload tempted us. Idle hands are indeed the devil’s playground.

The three inside the house finally surrendered, realizing we had a superior ammo cache. They marched out the door with hands raised and reported that we (the outside rebels) were in for it when the grownups got back. Knowing they were right, we started wiping tomato juice and seeds to conceal our short-lived victory.

Memories of growing up on the farm weren’t all this fun. There was lots of dirty jobs that had to get done. And the kids (5 boys and one girl) got dirty doing it. This before hand sanitizers and bicycle helmets. Getting dirty was part of growing up. Cleaning up for us was a cool dip in the lake to knock the heavy dirt off before dinner.

A few miles up the dirt road was a dairy. My best friend helped out around the dairy for extra money. I would go with him some days. It was a commercial operation but we were allowed to drink some raw milk at the end of work. Delicious stuff.

If you listen to the propaganda from the FDA you’ll never try a sip of raw milk (AKA – Farm Milk, Real Milk), much less let your kids get near it. Apparently, this stuff will kill you. The milk nazis are waging war on raw milk farmers who offer this natural goodness to Joe and Jane Public. The Industrial Food Machine has successfully brainwashed and homogenized the herd to fear Real Milk. The pasteurized cousin of raw milk loses its beneficial bacteria through heat and nutrients are damaged and destroyed.

I personally don’t drink store bought milk anymore. I still use dairy products from free-range, grass-fed cows like organic heavy whipping cream, butter, kefir, and ghee. I even pick up a bottle of raw goat’s milk at the farmers market from time to time – for ‘pet’ use only, of course. Plus, goat’s milk has more beneficial properties for your health than cow’s milk. For anyone considering milk production on their farmstead, goats are a valuable addition.

How ’bout a glass of Nanny State?

Pick an alphabet agency. These so called government agencies (pimps for the Big’s) are suppose to oversee and provide safe food, drugs, education, etc. Even in the face scientific and anecdotal evidence concerning the consumption of raw milk, the FDA can’t risk the thought of commoners seeing the truth.

In a recent study on allergies in children, Amish children in northern Indiana were tested for allergies, along with a group of non-farm and farm raised Swiss children. The Amish children mostly drank only raw milk and participated in ‘dirty’ jobs on the farm.

Because the Amish emigrated from Switzerland, and are thus genetically similar, the team compared Northern Indiana Amish farm children with today’s Swiss kids. Though rural kids are known to be healthier than city kids, the team found that the Amish have a superior immune response to allergens and asthma than even Swiss farm kids have.

Don’t be shocked if you’re charged with ‘child endangerment’ for allowing your children to drink Real Milk – it’s not your choice, remember.

Even those with lactose intolerance can drink Farm Milk without ill effects – thanks to the naturally occurring L. lactis bacterial breaking down lactose in raw milk. The pasteurized non-Real Milk loses it’s beneficial bacteria in the heating process, but leaves some of the harmful nasties. The process turns the milk sugar lactose into beta-lactose causing intolerance in some people.

Whether to drink Real Milk and dairy or not is a very personal choice. If you chose to drink milk, I’d suggest the real, natural, unadulterated white goodness.

If you want to find the real stuff, here’s some helpful resources to help with your search.

NOTE: Check you local and state laws concerning Real Milk. It’s a shame we don’t live in a free market where we are able to voluntarily exchange value for value. That’s not our reality. Do your due diligence and live healthy.

Your turn. What’s been your experience with Real Milk, if any?

One thought on “Homogenizing the Herd: Real Milk and Your Health”