I had a friend who was ventilated by some grudge-holding thug. Apparently, this idiot wanted to get even for a business deal that went south. He chased my friend through the bays of his car wash shooting at him with a .22 revolver. Fortunately, only his love handles got pierced.  After recovering, my buddy began making a plan to never get caught defenseless again. 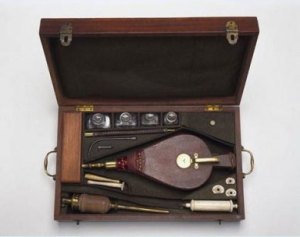 What follows may be painful for some. It may hurt as much as the old tobacco smoke enema. The only difference is that I’m NOT blowing smoke up yours.

Why do so many Americans refuse to prepare for worst case situations?

Or better yet, why do they not even prep for potential everyday emergencies? You’ve seen them pass you on their donut tire at 67 miles per hour heading to the 7-11 to get their winning lotto ticket. I’m sure with all their winnings they’ll be able to prepare, right?

Being prepared doesn’t take huge financial windfalls. So why do so many people think it’s a stupid idea to be prepared? Here’s my list.

A) Peer Pressure. Remember school days? Who wants to be standing outside looking in on the popular group? We all want to feel important and part of a group. We’re social animals. The group we associate with can determine our future.

My daddy always told me, “If you lay down with dogs, you’ll get up with fleas.” If you hang out with prepared individuals, you’re likely to become more prepared. As prepping goes more mainstream, many in the media portray preppers as crazy, racist, isolationist, anti-everything survivalist. None of us want that label. There’s always a few fringe types in any group that make media salivary glands wet. The new growth to the prepper movement is fueled by “normal” people like soccer moms, taxpaying business owners, and law-abiding folk.

B) Government Schools. My day job is to teach at a local  government indoctrination center. My advice to any preparedness minded parent of school aged children: AVOID GOVERNMENT SCHOOLS NO MATTER THE COST! Government schools manage ignorance for profit. Read more here.

Preparedness and survival requires self-reliance and the ability to think for yourself. The State forces kids to spend their most formative 12 years (16+ including college) learning how not to learn, but conform. Finding learning in government schools is as hard as finding a corner in a round room. A quarter of their lives circle the toilet bowl taking the path of least resistance to the collective’s sewage plant to be recycled and made “safe” and useful tax-payers.

Parent choices greatly increase or decrease their kid’s survivability. So what’s the solution for educating prepared individuals? Homeschooling may seem impossible. Both parents have to work to keep the family feed, clothed and sheltered. It comes down to our priorities. What “important” stuff can we kick to the curb to rescue our kids from government gulags and offer them a real education? I can’t answer that for you. Humans are individuals with unique situations. One size does not fit all. Homeschool, unschool, anything but government school.

C) Dependence. We’ve abandoned our roots. Due to reason # (B), our history is intentionally distorted. I often ask kids to tell me about historical figures and events like Abraham Lincoln, the War of Northern Aggression, or more recently – the Federal Reserve. As to Lincoln and the unCivil War, kids today are taught that Lincoln invaded the south to free the slaves. While I abhor the concept of someone owning another person, I know that Lincoln didn’t care about slaves being freed. Follow the money.

When my ancestors stepped off a boat in 1735, there was no free lunch or welcome basket full of government goodies. dependence on their own ability, family, and immediate like-minded friends started my family journey in America. Their self-reliant skills didn’t insulate them from set-backs and calamities. The find-a-way-to-get-the-job-done attitude is what helped me and my family survive to this point. Thankfully, I’m part of the remnant of self-reliance left in our country. When their Katrina-style disasters hit, communities rebuilt without the help of FEMA. This spirit of pioneering one’s own life has been traded for dependence. Even after natural and man-made disasters, I’m amazed at the false hope Americans place in our government’s ability to sweep in for the rescue. It’s a stupid idea most Americans hold.

D) MBM (Morally Bankrupt Morons). “All I need is guns and ammo to survive. When the SHTF, I’ll just take what I need.” I’ve read this statement, or similar sentiments on many preparedness/survival forums. I want to think they were just trolls. But I know there are lazy, corrupt individuals that will resort to this style of survival – for a while. Do they think that the very people they plan to plunder are not able and ready to defend their personal property?

I saw an episode of Doomsday Preppers where one in their group stated that they don’t buy weapons and ammo. Their plan, when the armed  horde of hungry looters show up, is to show them all their food and offer more if they leave them unharmed. Maybe some MBM’s will live to loot another day. I wouldn’t place my hopes of survival in this strategy. Your mileage may very.

Some people have an aversion, even a fear of tools called guns. In the wake of Sandy Hook, I’m encouraged by the bare ammo shelves and empty gun stores. It gives me hope that people are listening to their “gut” and making preparations for their future. Defending their life, liberty, and property against enemies, foreign and domestic, seems to be catching on. Why shouldn’t it? It’s our natural right.

I’ll put real simple here. I don’t care who, whether pastor, clergyman, senator, family member, or Santa Clause tells you guns are evil and you don’t need them, put as much distance between them and you as possible. Part ways. Period.

Back to the MBM. These individuals embody the entitlement mentality and our moral backsliding in this country. Hunger is a strong motivator for stupid stuff. I’ve never been shot, and I’ve never shot anyone else. I pray to Papa that I never have to face the choice of kill or be killed. If that time comes, and I’m afraid it will, we each have to wrestle before hand with our resolve to protect our life, liberty, and happiness.

E) Nationalism. Arrogance leads to a fall. It could never happen here. This is America! We’re the envy of the world. I’m convinced that this is the thinking of the mentally ill – or the historically illiterate. I hear the disdain coming from ‘educated’ folk all the time. I think they suffer from altitude sickness in their ivory towers. Totalitarianism happens one step at a time. As long as we are allowed to wake up in our homes, drink our coffee, go to work, watch our TV programs, rinse and repeat, tyranny becomes routine. Vigilance dies. It’s frog-boiling 101. Gradually heat the pot of water and the frogs don’t jump out.

I love my country. I love my freedom more. Humility and honesty seem to be lost traits. I hope that there are enough people waking up to help rebuild our crumbling republic. .

F) Mental Enslavement. With enough time, falling water can cut through rock. Is what we call ‘freedom’ really freedom? Many in the patriot movement call themselves “freedom lovers” yet accept tyranny as normal. We’ve all heard the battle cry of patriot-lite types. You’ll have to pry my guns from my cold dead fingers! No worries. The State will gladly oblige. Yet, the water fall of tyranny continues to eroded our liberties. It’s like watching a catastrophic train wreck in slow motion.

“Necessity is the excuse for every infringement of human freedom.” – William Pitt

We have as much freedom and liberty as the State allows. To realize and enjoy our natural rights, we must free our minds. Stop listening to talking heads. Free your mind. Don’t be deceived. The smoke screen isn’t just coming from the liberal media types. I use to listen to conservative talk radio religiously. I can’t stomach the party line talk anymore. Some pundits distinguish themselves as conservative, not republican. Liberal vs. conservative, Democrat vs. Republican. They are just different sides of the same liberty-destroying coin. Flip the coin to choose your master.

Ancient Chinese proverb: “The beginning of wisdom is to call things by their right names.”

G) Stifled Self-government. Critical thinking is dead (See # F). Passivity is encouraged, even demanded. Habits form us. We prefer  our guardians of darkness. It hides our secret need for fake security. We are addicted to our velvet chains. The principles of non-aggression and self-ownership have been systematically eradicated. Most Americans favor State coercion over individualism and self-reliance. Voluntary relationships between free individuals is no longer viewed as common sense. Our State monopoly on schooling crusades for government dependence and even sites individualism as a mental disorder.

Rejecting government dogma invites the use of ‘legal’ force, or the threat of force, to reform rebellious subjects of the State’s idea of being a good citizen. We have to get over ourselves and our dependency on government ‘safety’ nets. That is, if we want to be self-reliant. Breaking the addiction sometimes comes step-by-step. Sometimes it’s cold turkey that works. We’re all different. Do what works for you.

Don’t wait. Take one step towards building preparedness and resilience each day. What physical, mental, spiritual, emotional steps did you make today?

Don’t beat yourself up if any of these 7 reasons apply to you. It’s hard not to relate to some of these reasons. But who wants to be the person walking out of the restaurant bathroom with a strip of toilet paper stuck to their heel? How embarrassing.

So much is riding on you – your family, community, and even what’s left of our country.