Part of our Self-Reliant Summer series

You’ve heard the phrase “beggars can’t be choosers”, right? When your survival is on the line, don’t be ungrateful when a gift comes along. Survival gifts come in all sizes but it’s the small stuff that’s more likely to get you out alive.

You’re probably familiar with the mnemonic, Survival Rules of 3.  You’ve taken care of shelter and water but your situation may require a longer stay in the wilderness.

While there are documented exceptions to these rules, these are more like guidelines and depend on the context of your situation. People have survived well past three weeks with little to no nourishment. In fact, fasting may be your best bet.

You may be thinking, “I’ll forage enough wild plants to survive.” Wildcrafting is an excellent skill to possess. However, you’d have to eat a heck of a lot of seasonal wild greens to sustain you long-term. You need to find a source of protein and fat before you body resorts to cannibalism.

The days of prolific herds of deer and bison roaming the woodlands are gone. Big game animals aren’t hiding behind every tree. Even if they were, you may not be equipped to harvest them. You could make a primitive weapon from rocks and sticks but that costs calories too. Calories are the currency of survival, and everyone is on a tight budget. You burn 2,000 calories before noon crafting a weapon and stalking the animal and fail. Now what?

That’s when the small stuff saves you.

Could I put enough small stuff in the pot if I had to? Here’s how I tested my theory.

Start at the water’s edge. Creeks, rivers, lakes and ponds are where you’ll find bullfrogs, fish, birds, turtles, crawfish, rodents, and snakes. This is the easiest place to find small stuff.

Also known as crayfish, crawdad, mud bug, and creek lobster, these shellfish are quite tasty. The problem is they are hard to spot and catch without traps. As a child, my buddies and I walked creeks to catch these elusive critters by hand. They hide under rocks and ledges. If you’re brave enough, poke your hand in the crevices to locate the crawfish. If you’re lucky, he will clamp down on your finger and you can pull him out. It doesn’t hurt for long. You may also try gently lifting small flat rock to spot them. These methods take time and calories, two things you’ll be low on in a survival scenario.

It’s not likely that you’ll have a wire minnow trap with you. If not, consider a gig. Sweep your gig under ledges and watch for a lightening quick streak to exit. That’s your dinner. He probably scooted to his next hiding place. Now you’ve narrowed down his location and may have a chance.

This trap is an adaptation of the fish trap Steve Watts illustrates in his book, Practicing Primitive: A Handbook of Aboriginal Skills. Trapping small stuff conserves calories once the trap is built. Keep an eye out for hollow logs. They can be converted into crawfish or fish traps without a large expenditure of calories.

A hollow log about 2 feet long with a 4″ opening.

Plug the smaller hole with a stick or rock.

The woven funnel is inserted in one end of a hollow log with the other opening plugged to create a bushcraft crawfish trap.

Weave a funnel using vines and sticks and insert in one opening of the log. Plug the other end with a stick or rock. Bait the trap by placing fresh carrion, worms, or grubs inside the log. Fresh bait is best for crawfish. Secure the funnel and sink the log in a creek or pond with a heavy rock. Forget about the trap for a few hours. It’s highly probably that you’ll have dinner when you return.

A few crawfish from the log trap in the bucket for dinner.

To prepare creek lobster, bring water to a rolling boil in container and drop your catch into the water. You won’t have corn, potatoes, and sausage for a wilderness low country boil. But you’ve got protein. Boil about 5 minutes. Hold the head in one hand and twist the tail off with the other hand. Gently pull the middle fin on the back of the tail to devein (optional). Crack the shell open to get to the tail meat. Pop the mudpuppy in your mouth and enjoy. Don’t forget to suck the head to remove all the yummy juice.

A word about gear. If man-made it, it’ll break eventually. Two tines on the gig pictured above were lose after hitting a rock. I was able to pull them out with little effort. I kept the barbed tines since they’d make great improvised fishing hooks for larger fish.

A better method and one which is more reliable for survival purposes is a homemade gig.

Assuming you have a cutting tool, cut a green sapling between 1-2 inches in diameter. Split the trunk end of the sapling to make four separate prongs. Make the splits about 6 to 8 inches deep. Insert a twig about the size of your pinky finger inside the split as a spacer for the prongs. Repeat the process with another twig spreader so that the two twigs meet forming a cross at the base of the splits. Lash the twig spreaders to the gig with cordage – natural or commercial. Sharpen the tines and go find some slithering small stuff.

Water Moccasin on a stick

This homemade survival tool is effective on snakes, fish, and other small game as well. Check your local hunting and fishing regulations before practicing.

Water moccasin, like other venomous snakes in the eastern woodlands, are edible. To prepare a venomous pit viper, chop off the head a few inches below it venom sacs. Slit the belly and remove its entrails and skin. Skewer the meat with a green limb and roast over a fire until well done. You may also like snake stew with a few wild edibles. Rattlesnake is my favorite.

Warning: Bury the severed head in the ground. The muscular bite reflex continues even after the snake is dispatched.

With enough small stuff, you can reload your reserves. Smaller minnows and sun-fish can also be used as bait for larger fish, turtles, and crawfish. I used a commercial minnow trap to catch several small bream at our cabin/shack. I wrapped a piece of bacon in tin foil and suspended it inside the trap. This prevents minnows and crawfish from feeding on the bait from the outside edge of the trap.

About a dozen bait-minnows in less than an hour

Many indigenous tribes used plants to poison or stun fish. When ingested or passed over the gills, the fish would float helplessly on top of the water for easy gathering. In my state, Georgia, the Cherokee used the bark and green nut husks of Black Walnut trees and Polkweed berries as a fish poison. Once the fish reach un-poisoned water, they would recover.

No, I’ve never tried this method. From my research, I’ve found that the green husks must be pounded to pulp and introduced into a pooled area of a stream or slow-moving river or a still body of water. Processing enough husks or plant material may burn more calories than could be replenished by floating fish.

Rotenone and saponins are the active chemicals that affects the breathing mechanism of fish but not their edibility. How much to use? Not sure. Maybe one of our readers could enlighten us on this technique.

NOTE: Fish poisoning is illegal in most states in the U.S. I don’t endorse this method. I added it for educational purposes only.

MRE’s on the Half Shell 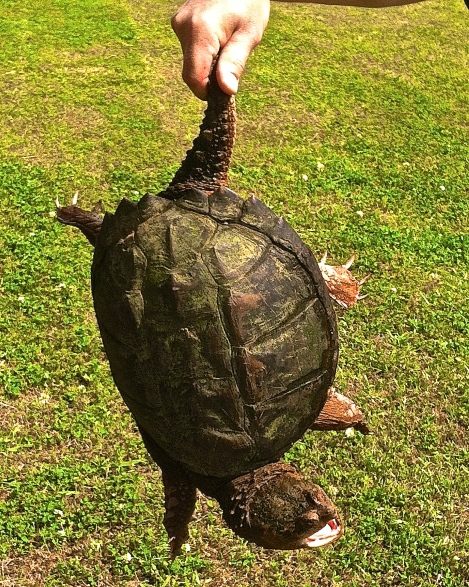 Turtles are slower than most animals in the forest. No surprise there. Snapping turtles do what their name implies… oh, snap. Unless your Turtle Man and have experience on which end to grab, these feisty creatures can perform instant digit amputations. Senseless injury in a survival scenario can be fatal.

I’ll leave it to you to research catching, cleaning, dressing, and cooking methods. Here are few useful resources here and here.

The prospect of feeding your body in a long-term survival situation is a challenge. Focus on the small survival foods. Choose a few methods to practice in case you ever have to depend on them for a meal. And remember to be thankful for any survival gift that comes your way. Bon appétit!

Keep Doing the Stuff of Self-reliance,