Top 13 Uses for Pine Trees in Woodcraft and Self-Reliance

Posted on September 26, 2014 by Survival Sherpa

Feel the nip in the air? Summer fades and autumn arrives to transform the forest canopy into an artist’s palate. Hunters, campers, and hikers are gearing up to enjoy the great outdoors.

Winter is on the way and many of your favorite edible and medicinal plants will fade into the landscape. But trees, they’ll stick around all four seasons. Now is the time to locate these valuable resources before their foliage covers the forest floor.

You may have a favorite season to tramp in the woods. For me, it’s Fall, Winter, Spring and Summer! Journal the location of these valuable resources. With the exception of evergreens, the only obvious identifying characteristics in the winter months will be the tree bark.

In this 5 Part Series, we’ll cover my top 5 useful trees found in the Eastern Woodlands; more specifically, in my home state of Georgia. These may be in your neck of the woods too. First up, a tree that is ease to identify year round.

Let’s start with North America’s most familiar and successful conifer, pine trees. Whether you’re from the south or not, you know a pine when you see one.

There are 36 pines in North America to choose from. To narrow down the species, count the needles. The Eastern White Pine (Pinus strobus) is the only species with 5 needles in the fascicle sheath (the paper-like sheath surrounding the base of the needles). I’m just south of their natural range and haven’t had much experience with this variety. This tree is touted as the king of Vitamin C. But all pines are useful medicinally.

A.) Pine Needle Tea: Drink a cup of pine needle tea to extract the useful stuff when you feel flu-like symptoms in your body. More research can be found here.

How to Make Pine Needle Tea

Add a few pine needles to a cup of boiled water (Don’t boil the needles in the water as this will release un-tasty turpenes). Allow to steep for 3 to 5 minutes. Add natural sweetener if you like. I prefer pine needles only for a Vitamin C boost!

B.) Pine Bark Band Aid: The inner bark can be fashioned as an antiseptic Band Aid for cuts and scraps. Apply to wound and secure with duct tape, bandana, or cordage. 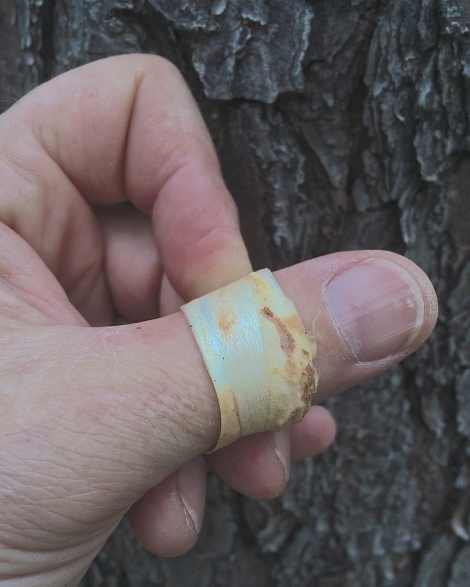 C.) Pine Sap/Resin: This sticky sap can also be used to cover wounds, blisters, and burns. Collect hardened sap from a wounded tree and heat it to make it pliable. 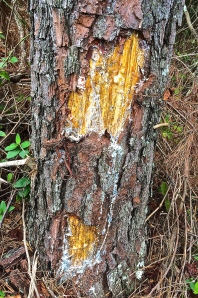 Mowers recently clipped this tree on a power line. The white streaks are pine sap. Older sap is easier to collect when it forms an amber “ball” at a wound.

D.) Pine Pollen: The yellow pine pollen that blankets the south in the spring is actually beneficial, not only for pine tree reproduction, but also for boosting our energy levels with small levels of testosterone.

F.) Firecraft: Fat lighter’d (fatwood, lighter wood, fat lighter, pine knot) is in every fire kit I own. It’s plentiful in Georgia and hard to beat as a natural fire starter/extender – especially in wet conditions.

Shavings from fatwood will ignite with a ferrro rod.

J.) Illumination: Fat Lighter’d torches are simple to make and adds light to your camp or night-time trek. 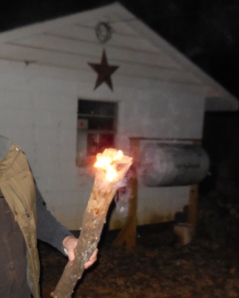 K.) Hugelcultur: Dead wood in hugelcultur beds acts as a water retention sponge to help build food independence and self-reliance. Want to build one? One of our Doing the Stuff Network members shows you how Here.

L.) Signaling: To alert rescuers, a pre-made signal fire built with green pine boughs on top will generate enough white smoke to be seen for miles.

M.) Firewood: Burning pine on your campfire won’t produce BTU’s like hardwoods, but will keep you warm and cook your coffee. Plus, piney forests are littered with an abundance of dead limbs for fuel. The carpet of dead needles can be gathered for tinder material.

The lowly pine is listed first in our series for a reason. As you can see, its uses are many… too many to list here! Please add to the list in the comments anything I missed (I always miss something) to help us learn from each other.

Next up in the series: White Oak.