Cutting to the Chase When Choosing an Ax for Self-Reliance

I, an incurable Ax Junkie, hereby nominate the man or woman responsible for hafting a stone to the end of a stick as the first inductee in the Tool-User Hall of Fame. Second only to clubs, axes are possibly the oldest tool known to man. This wooden lever attached to a stone, a simple machine, was in use over 30,000 years ago revolutionizing not only our “survival kits”, but our destiny as tool-users!

anachronisim [uh–nak-ruh-niz-uh m] – a thing belonging or appropriate to a period other than that in which it exists, especially a thing that is conspicuously old-fashioned.

To the modern backpacker, axes are an anachronisim. One reason I love axes is that they are no longer deemed necessary by moderns. Too heavy. Too dangerous. We have chainsaws now! Besides, who needs to process firewood when a lightweight compressed gas stove will cook freeze dried meal in a bag.

However, not too long ago, it was ill-advised to enter the backcountry without an ax. According to early Boy Scout manuals, young scouts were expected to be proficient axmen, to the point of cooking a complete meal with this cutting tool. Any person wanting to sharpen their woodcraft/bushcraft skills needs an ax.

I’ve had several people ask my opinion on ax selection lately. This guide is written for those who have never owned an ax or may buy only one or two in a lifetime. It is not a comprehensive ax “Bible” but intended for novice axmen and self-reliant types wanting or needing to feel the pleasure of a hickory handle whist through air, hear the thud of metal striking wood, and watch wood chips fly.

For the sake of clarity, refer to the diagram below of basic terminology. All you really need to know is that you grip the handle and swing the sharp end against wood.

The above photo features a single bit (aka – poll ax) Plumb Boy Scouts of America 3/4 ax with a fawn’s foot handle I acquired for $15. Not bad for a classic American-made ax!

The simplified version of all these ax terms is… you cut with the sharp end while holding the wooden end.

A woodsman should carry a hatchet, and he should be as critical in selecting it as in buying a gun. The notion that a heavy hunting knife can do the work of a hatchet is a delusion.

~ Horace Kephart, from Camping and Woodcraft, 1917

Selecting an ax has many variables, but, mainly, you want one that works best for your intended purpose. I have a small collection of axes in different patterns and weights. Each design was meant to do different jobs.

“Knicks and dull edges are abominations, so use knives and hatchets for nothing but they were made for.” – Horace Kephart, 1917

The ax that serves me in the field the most is a 16 inch Wetterlings Hunter’s Hatchet. Why? It’s not burdensome to carry. She’s always strapped to my pack or haversack. Just over 2 pounds, this hatchet has preformed yeoman’s work on tasks requiring a larger ax. 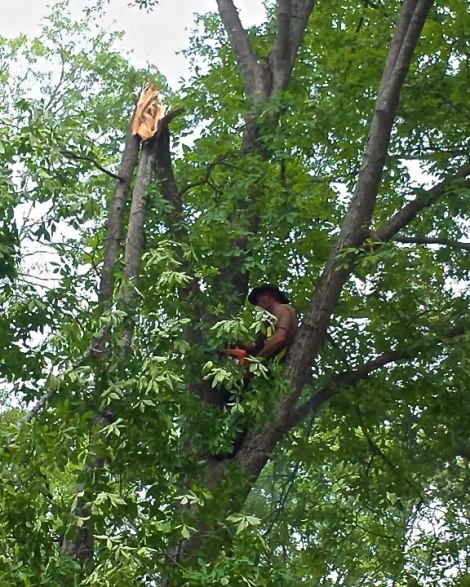 When my chainsaw died, the small Wetterlings hatchet proved its worth and maneuverability on our neighbor’s storm damaged hickory tree

Note: The shorter the ax, the more dangerous it becomes. Don’t fear the ax, learn to use it properly. Swing time with your ax is the only way to learn this skill.

From spoon carving to building semi-permanent shelter, a hatchet can do the job. When scouting for shelter material, the Wetterlings rode on a loop attached to my belt. It makes a great light camping ax as well.

In colder climates where large amounts of firewood are required for warmth at camp, a 3/4 ax may be your best bet. This style ax reaches from armpit to the palm of your hand with a head weight of 2 to 3 pounds and is hafted on an 18 to 28 inch handle – an ideal tool for younger woodsmen (boy’s ax) and for general use for adults.

The deciding factor on which ax to carry is often an issue of conveyance. Tramping requires that you to be the “mule.” Where weight is not an issue, as in car camping, canoe trips, or on horseback, you might opt for the larger felling ax for wood processing. All the while packing your small hatchet for a scout-about, quartering game, and other camp tasks.

The most common purpose of an ax is cutting firewood. I asked the question, “How long will chainsaws hum along?” in a previous article. Even if the gas engines keep pumping noise in the backcountry, there’s too much nostalgia and practicality to not add a good felling ax to your self-reliance toolbox. 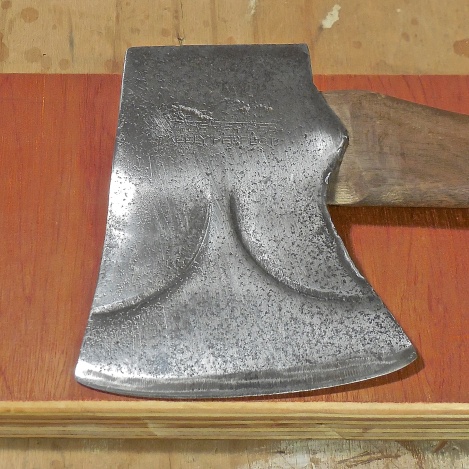 Above is a True Temper Kelly Perfect with a 30 inch handle I restored. This cutting tool chops large diameter logs like a boss.

The early American felling ax was hand-forged by local blacksmiths. Ax patterns were named based on their regional location; Dayton, Michigan, Jersey, Hudson Bay, New England, North Carolina, etc. Some of these patterns are still popular with modern ax makers. A typical felling axhead weighs between 3.5 to 6 pounds with a handle length between 30 and 36 inches.

Most American ax manufacturers bit the dust when the chainsaw was introduced in the logging industry. Buyer Beware: Axes in big box stores (made in China) are not going to be passed down as family heirlooms. My most productive ax scores have been at local antique shops, flea markets, and yard/estate sales. Old American-made axes are still available and begging to be put to use.

Most used axes will need to be re-handled. Not a problem. Here’s how to re-haft an ax. Pay more attention to the axhead’s condition and manufacturer. More detailed info on vintage axes can be found at Yester Year Tools (link in the Ax Resources section below).

Hardware stores may have a handle with good grain, but not likely. No matter where you get your new haft, check the run of the wood grain from the side view. Grain running perpendicular to the handle won’t last long. Look for grain running parallel the whole length of the handle. A few stray grains won’t hurt.

Check the butt end of the handle. Grain running vertically on the end is what you want. Horizontal grain in striking tools won’t absorb constant shocks.

When your search for a straight grained ax handle fails, make your own. Here’s a tutorial on making a hickory ax handle.

Finding a good ax that fits your needs is often a difficult task. Hopefully, this information will help with your search for a the most versatile tool of self-reliance.