If You Build it, They Will Come

I’m not one to ask for help often. But I’m glad I did. They kept showing up in the Georgia heat and humidity ready to sweat through 90+ degree temperatures.

The Crew disassembled the log cabin in one day at the end of June. Once the logs were moved to the new site, I started putting the puzzle back together. I managed to stack 7 courses on the sill logs before The Crew reached out and scolded me for not extending an invitation sooner. “All ya gotta do is ask.” I’m still amazed, but shouldn’t be, that they keep coming to this party. True friends do that, ya know.

Now we’re to the point of needing metal for the roof. Here’s a look at the progress since my last log cabin update (July 31, 2019). 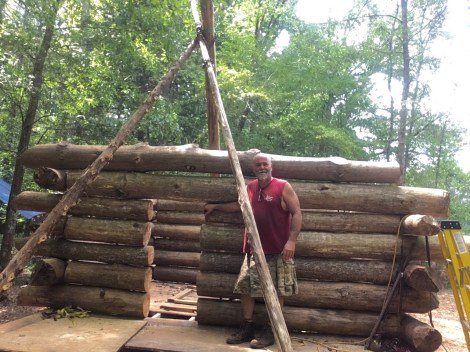 Just before The Crew showed up.

Re-assembling the wall logs was like a paint by numbers set. Dianne had labeled the logs before we took it down. It was just a matter of putting numbers back where we found them on the walls.

Jeff and I swinging “Good Times” to secure logs with rebar pins.

I dreaded this task. I wasn’t sure if the plan would work. How could we get a 21 foot log over thirteen feet above the floor, balanced and secured atop two vertical ridge pole support logs?

Turns out that raising the ridge pole (RP) may have been the easiest part of the build. We cut and peeled two ridge pole support logs (RPSL) and attached them to the back and porch walls with 1/2″ all-thread rod. The poles reached about 5 feet above the plate logs to give me the pitch I wanted for the roof. 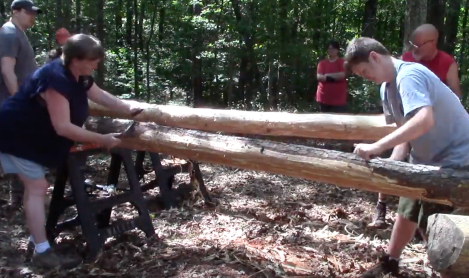 Lifting the second ridge pole support log into place on the front porch. 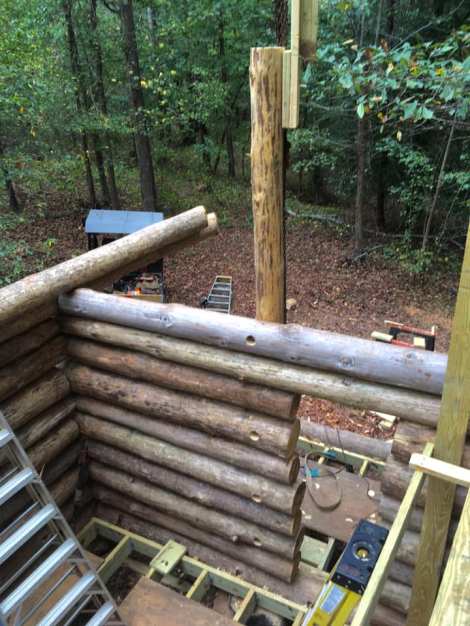 All-thread in a counter-sunk hole which will be plugged with wood.

We predrilled holes for the rebar pins in the RP before lifting. With rigging in place, we slowly lifted the RP to the top of the RPSL’s. This went smoother than I could have imagined. JT aligned his end and drove a rebar pin through the RP into the RPSL with 3 inches of rebar above the RP. The 3 inches of rebar was bent over on top of the RP for added holding power.

Even though we measured hole placement on the RP, my end was 4 inches short of center on the RPSL. I re-drilled my end from the scaffolding we built. I drove in my rebar to secure the RP. Time for much needed break!

The ridge pole once the temporary lifting poles and chain falls were removed.

I had originally planned to use log rafters and log gables on this project. However, with all the delays we encountered with the disassembly and reassembly, I opted for dimensional lumber to expedite the process. This is just a practice cabin, by the way.

We sank a deck screw in two of the 2″x6″x14′ laid out at a 45 degree angle. The screw allowed the boards to “scissor” on top of the RP as we rested the tails on the top plate logs. 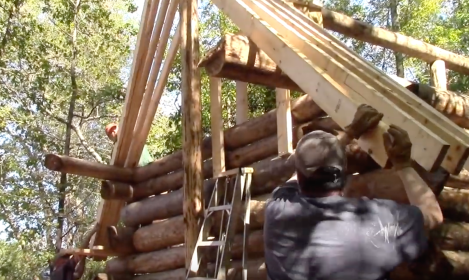 Staging rafters over the ridge pole and top plate logs.

We slid the rafters down the RP and set them on 2 foot centers. We eyeballed the first rafter’s placement on the plate logs and toe-nailed it into place. I probably should have sawn the RP and plate logs flat to get a level run on the rafters. To correct the situation, we’ll have to lift or lower individual rafters at the top plate logs as needed. There’s always challenges when using dimensional lumber on raw logs.

Jeff snapped this shot after we ran out of lumber for rafters.

The gables, as mentioned earlier, will be dimensional lumber. I’m not sure what I’ll use for sheathing the gables. A few ideas are floating in my head.

A top plate log needed to be installed between the long porch plate logs. We skinned a log, measured and cut to length, and pinned it. We used two of the original ax-hewn floor joists from the first build to vertically support the cross member.

Jeff and JT doing the heavy lifting on the cross member.

We laid two rafter boards flat over the RP to create a top plate for the gable studs. We started framing under the RP and worked our way out to the plate logs with 2×6 studs. Dianne did a fine job of cutting bevels and lengths for the studs.

This pics shows the flat 2×6 top plate studded up from the inside of the porch. 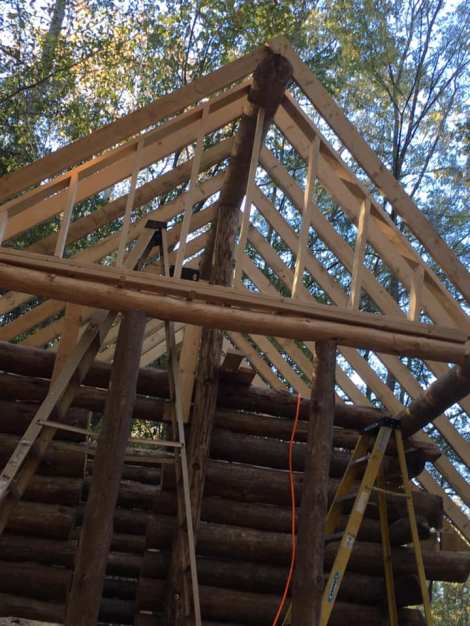 Gable view from the outside of the porch.

The Crew on gable day!

The sleeping loft will be above the porch where The Crew is standing. Like most of the plans on this project, we’ll figure it out as we go.

Copyright © by Survival Sherpa: Content on this site (unless the work of a third-party) may be shared freely in digital form, in part or whole, for non-commercial use with a link back to this site crediting the author. All links in articles must remain intact as originally posted in order to be republished. If you are interested a third-party article, please contact the author directly for republishing information.

5 thoughts on “If You Build it, They Will Come”