Should I Register My High-Capacity Pressure Canner?

You’re joking, right? Nope. Reality is stranger than fiction. Thanks to Daisy Luther for alerting us to the inherent dangers of another tool of violence – the pressure cooker! One retailer is already pulling them from their shelves.

It’s not hard to believe if you’ve been paying attention. Box cutters, we were told, was the weapon used to hijack the planes that crashed into the Twin Towers on 9/11. The fear escalates. Now its evil cooking equipment.

In ’06 I had a perfectly harmless tool confiscated by TSA thugs.

DRG and I were flying north for a family reunion. We were late getting to the airport and wasn’t able to get a piece of luggage checked. The lady with the Delta uniform told us to go through security with the piece and have the helpful attendants store it in the cabin. Great!

I loaded the luggage on the belt at the Gate-Rape station and the x-ray machine caught it. Alarms! What had I packed that would send uniformed goons into high alert and land me on a watch list?

A knife. Not a machete or Bowie knife. Not a box cutter. The subject of alarm was a Swiss Army knife I found on the edge of a creek while camping years prior. I had cleaned it, replace the scales, and grown very fond of my new-found tool. It was my constant companion on fishing and hunting trips. I packed it in luggage that I thought would be checked and escape the prying eyes of TSAers. Now, it was gone forever. Confiscated. It probably ended up in some costumed enforcer’s pocket.

On the remaining flights and connections on our trip, I was flagged and given “special” attention. Hey, at least the lines were short.

Our benevolent government would have us believe that banning a person, place, or thing is effective.

Prohibition taught us that alcohol was in high demand and people found ways to make it in bath tubs and other clever and unsanitary methods. The common man was only able to drink rotgut while the elites secretly drank single malt. The War-On-Drugs has caused an explosion of availability of ‘illegal’ drug availability. The War-On-Terror? How’s that going for us? All these bans benefit the State – not individuals.

The pressure cooker/canner is not officially banned yet. It’s coming – stock up while you can *pun*. You’ll be glad you did. Remember the run on guns and ammo?

Oh yeah, DO NOT register your high-capacity pressure canner! That’s the first step to confiscation.

I Didn’t Know Squat About Proper Poop Technique Until Now

The bus stopped in front of a what appeared to be a service station with one gas pump. My American friend and I stepped off to relieve ourselves midway through our four-hour journey to another Siberian town in the early 90’s.

“Where’s the restroom,” my friend asked since he spoke Russian better than I.

We both headed around the corner of what was left the Soviet era fueling station. There wasn’t a long line waiting to relieve themselves. Here’s why.

What I saw will be hard to believe and offensive to most modern American sensibilities – unless you’ve been there, crapped there. The “Powder Room” consisted of a four-foot wide trench with two wooden slats straddling the bottomless abyss, no running water, and a stench that killed the blow flies before they could belly up to the feast. Contrary to popular belief, it gets hot enough in southern Siberia in July to raise flies in a latrine. One brave native sojourner was perched precariously in a squat position doing his business – no stalls or paper work to finish the job.

“You go ahead,” I told my buddy as I choked back my sudden urge to hurl.

We both decided to man-up, skip the squatty hole, and pray for a speedy journey. However, I did make my #1 reach the pit from the door-less threshold of the Russian roadside restroom.

While the facilities were less than desirable, the squatting Russian’s technique I unfortunately witnessed makes my mind flow with questions. Could our western society learn a thing or two about taking a #2. Could it be that we are doing this simple bodily function wrong? I never really considered that there is a wrong way to do this deed.

Unless you’re camping in the wilderness or traveling through third world countries as you read this, there’s a really good chance the crapper you use today will be an elevated toilet…thanks to indoor plumbing. Don’t get me wrong here. I love the convenience of running water and sewer lines. My daddy provided for our family by installing, unclogging, and repairing these pipes and fixtures. However, the unintended consequence of  modern sitting toilets have been linked to hemorrhoids, chronic constipation, IBD (Inflammatory Bowel Disease), colitis, and even colon cancer.

Getting to the bottom of the issue

It appears that we humans are meant to squat when nature calls. You see, the puborectalis muscle (sphincter) is in a bind when we sit. When doing the squat technique, things flow with less restriction and strain. Folks in the know recommend creating a 35 degree angle between your thighs and torso for proper elimination. Talia Marcheggiani quotes the smart people at Standford in her post about colon health:

According to researchers at Stanford University, the puborectalis muscle, which chokes off the lower end of the rectum, preventing you from eliminating waste, is partially flexed while in a seated position (like when you sit on a modern toilet).  This prevents waste from leaving the rectum and prevents you from having a proper bowel movement, leading to straining and constipation.

This doesn’t mean you have to revert to caveman living, takeover you cat’s litter box, or dig latrines in the backyard. You can achieve the desired pooping angle on your sitting toilet by simply elevating your feet. Here’s a new DIY project for the weekend. Fancy is not necessary. A simple stool (no, not that kind) like toddlers use to stand and deliver when they’re going through their rite of passage – using the big boy toilet. A basket or crate could be used. Make sure it’s not flimsy. A collapse could de-throne you.

Not into DIY? Here are some commerically built potty aids:

Is there any merit in these methods or only marketing myths?

What do y’all think? Time to log out and delve deeply into the bowels of the issue. Seriously, anyone want to share – anonymously if you wish? 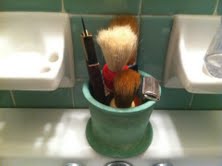 This isn’t on the top of any apocalyptic list-of-lists. And in the midst of Novembeard, why would I spend money on shaving equipment like my granddaddy used? Two reasons:

A.) Cool factor: Mention your close straight razor shave at the water cooler and get instant man-cred from the disposable razor co-workers. Be sure to remove all the bloody tissue dotting your face before bragging.

B.) Straight razors shave close and can be used to defend against sudden zombie attacks. Think redundancy my friend. Electric and plastic disposable razors have no proven stopping power on the non-dead. 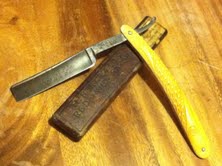 Back up zombie slayer

DRG and I were at a local antique shop yesterday and I spotted this shaving cup slammed with old-fashioned grooming utensils. With our budget tight, I almost passed. Impulse purchases have gotten me into trouble before. So I showed my treasure to DRG.

Hiding my childish excitement, I showed her the price. The tag read $25.00 for the whole kit.

“You should get it. You’ve looking for a straight razor for a while. That’s the whole set up!” 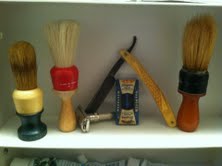 They fit nicely into my medicine cabinet above my sink. They look cool, too.

In exchange of 25 fiat dollars, I brought home my first grandpa shaving kit. Now I’m looking for a strop. Wet shaving with a safety razor or straight razor is a lost art. The internet is full of forums and sites solely dedicated to reviving this classic technique. I’m about to jump into one of the rabbit holes and try to figure it out. How hard can it be, right? 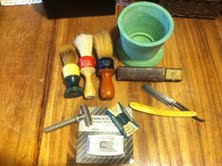 Unpacked. Notice the old pack of razors for the safety razor.

I’ll be posting an after-report once try this – if I don’t bled out. 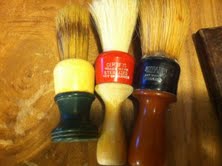