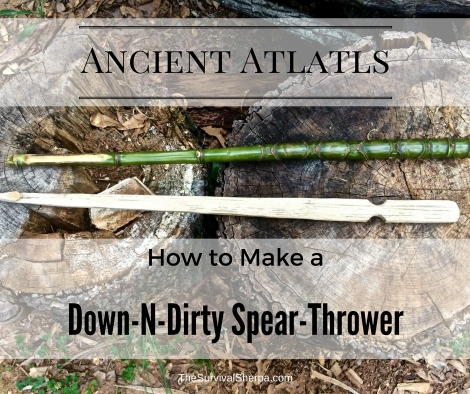 Somewhere down your family tree a spear-thrower used a simple, two-piece weapon to bring home the bacon… or wooly mammoth… or mastodon. Ancient atlatls have been discovered on every continent except Antarctica.

A simple dart-throwing stick with a handle on one end and spur (male end) or socket (female end) on the other end. The dart, a flexible spear, mates with the spur/socket when thrown. Typically about two feet long, an atlatl employs leverage to extend the arm’s length to propel a dart further and with more velocity than when thrown using only the arm.

Spanish conquistadors discovered quickly that their state-of-the-art armor was no match for the primitive Aztec spear-throwers. Imagine becoming a kabob inside your standard issue fighting armor. The barbed stone point prevented Cortez’s men from pulling the shaft from their bodies in the opposite direction. It must be driven clean through the flesh to be removed. That’s impossible when the dart doesn’t pierce the backside of the metal suit. A slow death ensued when pinned inside one’s armor.

The primitive atlatl and dart system predates bow and arrow by thousands of years. The physics and math involved in this simple weapon is more complex than one might think. No. we’re not discussing calculus today. But we will delve into the past long enough to whet your appetite, and, hopefully spur you on to make your own dart-throwing weapon.

As I wrote this piece, I quickly realized it would be too long for one to sit through. In the spirit of keeping you interested in this primal weaponry, I plan to make this a multi-part series on atlatls, darts, fletching, and throwing.

My friend and expert primitive skills instructor, Scott Jones, taught a “Quickie” Atlatl class at a recent Workshops at the Woods. Having never thrown an atlatl, much less made one, I signed up.

Anyone who has never made a mistake has never tried anything new.
Albert Einstein

At first glance, the simplicity of this primitive technology deceives the beginning practitioner. There are details and tweaks which only experts like Scott have learned over years of experimentation. His idea of making a quickie atlatl from bamboo holds potential for self-reliant living. With a few basic knife skills, even atlatl newbies like me can carve out a very functional weapon.

Find a suitable piece of cane and cut it close to the ground. The way in which the nodes grow close together at the base of bamboo will make a heavier handle and add purchase when throwing. Scott provided shafts from his stand of golden bamboo on his property. I think you’ll find land owners happy to have you harvest as much bamboo as you’d like as it tends to take over. I’ve never been turned down.

Typically, atlatl length is about one-third the length of darts. Cut your bamboo so that a node is left at the smaller end of the atlatl. Mine measured 26 inches – armpit to the base of my middle finger. The end node will serve as the female “spur” which will mate with your dart.

This style of atlatl has a cup (female joint) not an actual spur (male joint). Use your knife to cut a long notch in the last joint of the bamboo. Begin by making a stop-cut about 1/4 inch from the end node (spur end) to a depth of 1/3rd to half way through the shaft. The notch should taper from zero to about 1/3rd the depth of the chamber toward the end node. This notch should be about 6 to 8 inches long and wide enough to accept your chosen dart shaft. The photos below show the cut.

A hacksaw blade is handy for making the stop-cut

Making the tapered cut to the end nock. 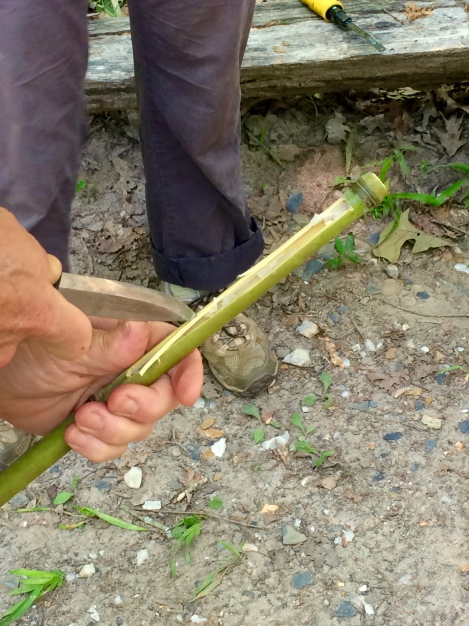 Clean up any rough edges with your knife leaving a small semicircle 1/4 inch in front of the end node where the dart seats. Test the seating by placing a dart (river cane in this case) in the female end. Hold the dart in one hand, the atlatl in the other, and check if the dart fits and moves without resistance. The dart should swing freely out of the atlatl notch until they are almost at 90 degrees from each other.

Before adding finger loops, pass your bamboo atlatl over and through a fire. Use leather gloves to keep the shaft moving through the flames over the entire surface. You’ll notice the waxes in the wood will begin to add a sheen to the atlatl. This process will help preserve the wood.

I found the bamboo atlatl (without finger loops) comfortable to throw by gripping the handle like a tennis racket. Scott had several different atlatl styles to practice with at class – some with loops, a few without. Finger loops add a secure hold on the shaft while throwing.

To add finger loops, bore a small hole through the handle end of the atlatl with an awl. The hole placement is determined by the base of your palm to the intersection of your index and middle fingers. Thread a piece of leather or buckskin through the hole and tie the ends to form a large loop. Test the fit by placing your fingers through the large loop with the shaft between your two fingers.

Leather looped through the holes and tied

Throwing with finger loops requires that you slip your index and middle fingers through the loops with the end of your grip at the base of your palm. Your loop fingers are split by the atlatl shaft with your thumb and remaining fingers securing the handle to your palm. 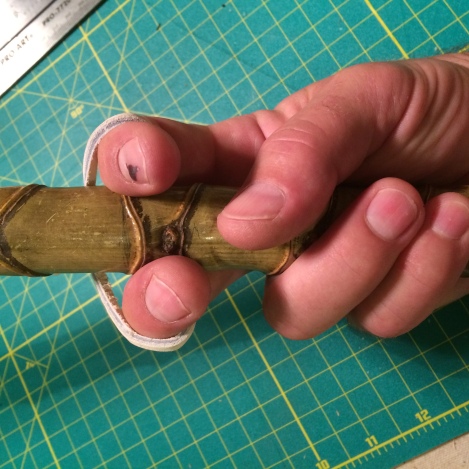 Adjust the loops by tightening or loosening the leather loop

One advantage Scott pointed out about his “quickie” atlatl is the fact that you can throw inferior darts without nocks required with typical spur-mounted atlatls. Any straight stick or cane will make an effective hunting projectile. This down-n-dirty design can be made in the field with a lot less effort and skill than traditional atlatls.

I would recommend using this method for those interested in making a spear-thrower for the first time. The entire process can be complete in an hours time. Finding and straightening darts, well, that’s gonna take some time. But having this survival skill-set in your arsenal is well worth the investment.

If you’re interested in learning primitive technology, Scott offers a wide variety of classes at his Workshops at the Woods. For those not local to our area, he has written two essential books I reference often:

Next in the series we’ll cover atlatl darts ~ the primitive projectile which brought down wooly mammoths and turned armor-plated conquistadors into Spanish shish kabob.