5 Ways To Avoid Being A Darwin Award Winner

I’ve been an honorable mention candidate for a “Darwin Award” numerous times. I’ve done stupid stuff. At one point I was 50 pounds overweight and a miserable specimen for survival. My feet hurt. Who could blame them. They had to slowly toot 220 pounds – 50 more than the manufacturer’s recommended weight load. I had fallen from fitness grace! While being that overweight is not healthy, it’ll be deadly in a survival situation. And this year’s Darwin Award goes to…. [Don’t insert your name here!].

Years of stupid caught up with me. I was an average athlete in high school and college. Growing up active, I never thought I’d allow this to happen to me. I still remember talking to a seasoned counselor at the summer camp I worked at during college. This wiser, older counselor (mid 30’s – it’s all relative, right?) who had “built a shed over his tools” with 30 extras pounds spoke the ‘truth’ about growing older. He himself had been where I was, young, fit and full of life. “Wait ’til you get a mortgage and kids. You’ll look like me.” Why I remember this so many years later is that his perception and ‘truth’ had become mine. Only I had added 50 lbs. instead of 30.

When I discovered “The Primal Blueprint” by Mark Sission, my lifestyle did a 180. The purpose of this post is not to dissect his book or bash fat people. If your interested, you’ll check it out. It’s your life. I just know it worked for me. One of the Mark’s rules for primal living is to avoid doing stupid stuff. Here are five amazingly simple steps to keep your name off the Darwin Award Winner list. 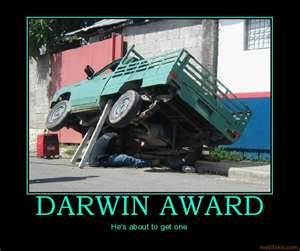 Some of the advice I read in the PrepperSphere only reinforces my theory of species-wide extinction. Note: I don’t claim to be an expert on anything. Read my writing at your own risk. My goal is to prove what works for me, and maybe you’ll try it. Or not. Now, onto more stupid stuff.

A really stupid idea I see promoted is the Bug-Out-Bag strategy. Hey, wait a minute! Don’t you have a BOB. Yes I do. Doesn’t that make you a hypocrite? No. Here’s why. I can carry mine. It’s not loaded with the latest mall-ninja throwing death stars. For the I’m-gonna-grab-my-BOB-and-live-off-the-land types who’s longest ‘run’ was to the Frigidaire, extinction awaits. If you’re last push-up consisted of pushing a frozen treat on a stick out of a sleeve, you should rethink your lifestyle (re-read the third paragraph). Your bug-out plan may be doomed. You’d do better sheltering in place and take your chances against the hungry hoards.

Again, I’m not hating on the plump preppers among us. Just trying introducing some common sense. The place to pick up free hiking gear is about two miles in on the AT. That’s where you’ll find the offloading zone. Either hikers packed unnecessary items (added weight), or were in poor physical shape and lightened the load to survive the next hill.

If you’re not a Sherpa, don’t try this!

Our retreat is a two-hour drive under rule of law conditions. When the brown stuff hits the fan, two hours could turn into two days or weeks. To make it there with family intact, there’s the possibility we’d have to hump the 95 miles – with packs – under crazy circumstances. The most desirable plan would be to physically live at your retreat location. If “ifs” and “buts” were candy and nuts…

B) Become A Producer. If you know how to make stuff, then Less Is More. This is 180 thinking. All the food, water, ammo, and medical supplies will eventually disappear from your basement bunker. I advocate stocking up on all these items in the good times. Put all the hay in the barn while it’s still daylight. But what happens when you run out? and you will run out in a prolonged spell of TEOTWASKI.

Wouldn’t it be smart to learn as many sustainable skills as possible. Wouldn’t you be popular among your smelly survivor groupies at your hide y-hole if you had the know-how and ability to make soap from scratch. Saponification anyone? You can only store so much soap, toothpaste, toilet paper, beans, bullets, and band-aids. Eventually someone will have to produce some stuff to consume. Hygiene products in long-term grid-down situations will be huge. Produce soap or barter with those who do.

Two of the oldest chemical companies got their start making soap. William Colgate (1806) and William Proctor and James Gamble (1837) kicked off their careers being producers. They made stuff – soap and candles. We’re still using their products today. Be a producer.

C) Don’t Panic. Loose your head = loose of life. Common sense is usually the first thing to collapse. While I’m not an expert in all things survival and preparedness, I try not to hit the panic button too often.

Get your hand off that!

The other day the wife and I were canning dilly beans. Ingredients ready. Jars, lids, and bands – check. Then I freaked out. I didn’t remember how much water to put in the new All American Pressure Canner. For those expert canners snickering right now… Stop it! Seems like a small thing, but I panicked. I rumbled through drawers and finally found the guidebook. I was reading the first half and told my wife to scan the back part – all at the same time! In hindsight, it was comical to see us scrambling. I was afraid I’d blow up the cooker with wrong water level.

Lesson: Know all the steps before the heat is turned up…and don’t panic. We made it through the process and learned from failure. Which brings us to my next point.

D) Fail Forward. My panic above taught me valuable lessons. My life has taught me to embrace failure. Trial and error is how we learn, discover, and invent. It’s never too late to learn new skills. The hardest hurdle is the fear of failure. At age 80, Moses lead his people out of slavery. Thomas Edison didn’t invent a filament for his light bulb on the first try. It’s highly likely, no – insured, that we will fail. Our attitude about failure determines which way we fall. Attitude determines altitude (sorry, a throwback from my coaching days).

My wife’s doctors have given her a 15% chance of beating cancer. Stupid odds. What do you do with news like that? We’re failing forward. With every setback, we regroup, re-think, and move one step towards our goal. It’s crazy scary. She’s a lover of life. She inspires me daily. She fails forward.

Failure when things are “normal” is just a bump in the road. In a survival situation, it becomes a mountain. Learn while it’s “normal” and life is good.

E) Grease The Groove of Preparedness. Prepping is a lifestyle. I guess some view it as a hobby. That’s how I started. It’s was a hobby. Then it became a lifestyle. How can we turn prepping into an effortless lifestyle? Grease the groove.

I first heard “grease the groove” when I started living a primal lifestyle. The idea comes from the world of exercise. It’s a process of progressing, step by step, to reach a given goal. Example: Two years and 50 pounds ago I could not do a single pull up. I installed a pull up bar in my shop and vowed to attempt a pull up every time I entered – which was several times a day. Even at work, I’d find a ledge or object from which to hang. I finally progressed to one pull up. It became a fun challenge to see how many places I could grease the groove.

How does this apply to prepping? When I walk into stores (especially thrift stores and yard sales) now, I look at items differently. How can I use this item in my preps? Does it have multiple uses? How many ways can I use that bandana in a survival situation? Would that cigar sleeve serve me in my BOB? Can I operate my sidearm in the dark? I can if I grease the groove.

Mentally and physically rehearse and practice until muscle memory takes over. I can start a fire with several methods. But if my hands are freezing in the rain/sleet, I might panic if I haven’t greased the groove. Hypothermia kills. Reminds me of the scene in “Jeremiah Johnson” when he found the 50 cal. in the frozen hands of the old mountain man.

Grease the groove to avoid a Darwin Award my friends. 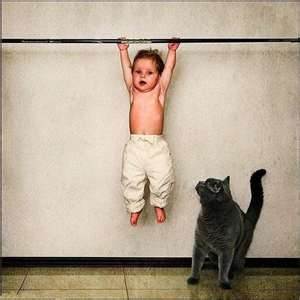