How to Harvest, Prepare, and Use Yellow Dock Root Medicinally 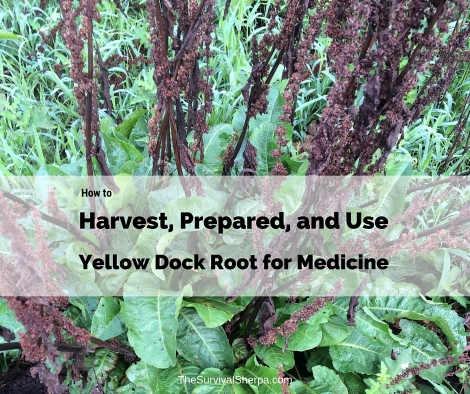 My neighbor hired a gentleman to pour a foundation and do the block work for an addition on their house. DRG and I stepped over to see the progress. A distinguished looking gentleman turned around as I admired his work. We shook hands and he introduced himself. “I’m Albert Floyd,” he said.

Sometime you meet a kindred spirit and a spiritual connection happens. 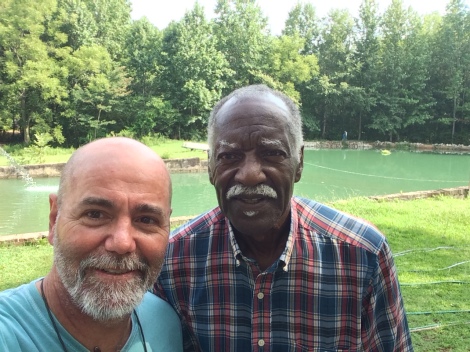 Albert and I began a conversation about his horse, Tiger, he taught to count, add, and subtract. Somewhere in our twenty-minute conversation I mentioned that my wife has been fighting cancer for the past five years. Albert told me he has been using yellow dock for many of his 76 years of life as a natural medicine. I knew of the plant but had never harvested any for use. 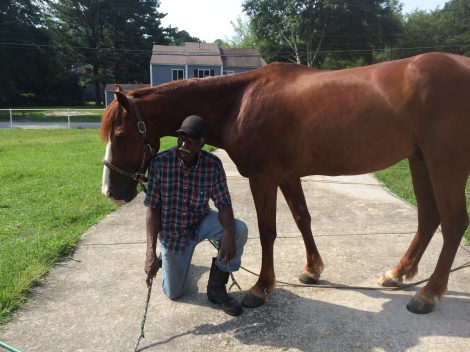 Tiger getting ready to count for me. Albert is a man of outstanding character by the way he treats all his animals.

Albert invited me to go dig yellow dock root the next morning. I love the medicinal properties of wild plants and trees. I happily agreed to get dirty digging this “weed.”

Most fields, waste places, roadsides, and weedy yards are good locations to find yellow dock (aka ~ curly dock, sour dock, narrow dock, garden patience and curled dock. Roadside weeds are typically sprayed with herbicides and should be avoided. It is easy to spot and identify in the second year of growth. You’ll see the rusty-brown flower stalk loaded with seeds in mid-summer to late fall. First year plants grow in a basal rosette similar to Common Mullein. In our area, this weed is a perennial it seems. Some botanists say they are biennial. Leaves are lance-like with curled edges and can grow over one foot in length and three inches across. 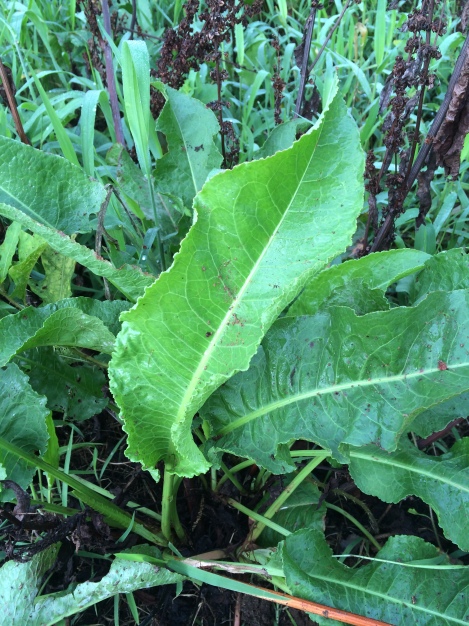 Remember, medical information on wild plants is for informational purposes only. Do your own due diligence on herbal medicine.

With that being said, my research found that yellow dock roots contain anthraquinones and tannin indicating use as mild laxative and astringent. Anthraquinones are commonly extracted from the Polygonaceae, or buckwheat family of plants. Some of the major chemical components of anthraquinone and its derivatives have demonstrated potential anticancer properties. (Source) This is the main reason we are experimenting with yellow dock.

However, yellow dock root has also been reported to be beneficial in the following ways:

Albert drove me out to a pasture he sharecropped as a young man. The property owner gave him permission to harvest all the invasive dock he could ever hope to use. Armed with a pickaxe, trenching shovel, and two empty feed bags, we waded through the rusty-brown stalks until we reached “the spot” where rings of freshly turned soil gave away Albert’s previous foraging trips. 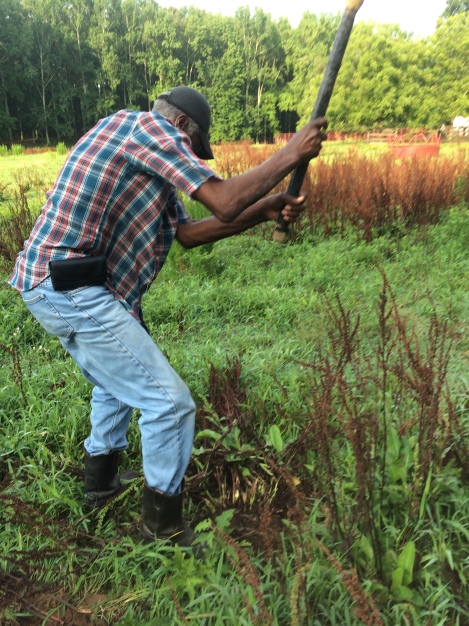 Albert getting to the root of the plant with his pickaxe

Before digging in, use the pickaxe to chop off the flower stem above ground. This clears the way for you to swing freely around the root. I used the trenching shovel like an ax to remove the plant tops. If you have a group of foragers along, make sure folks are a safe distance away before swinging.

This isn’t rocket science. Dig around the outskirts of the root ball and begin prying the plant out of the ground. I found that I could extract the long tap roots intact using the trenching shovel verses the pickaxe.

Once the root is free, tap it on the ground or digging tool to remove the soil from the root ball. Be a good steward and rake the excavated soil back in the hole – especially if livestock use the field. Gather up the dead flower stalks and remove them from the pasture as well. If you want to start your own dock garden, collect and sow a handful of seeds from the stalk. 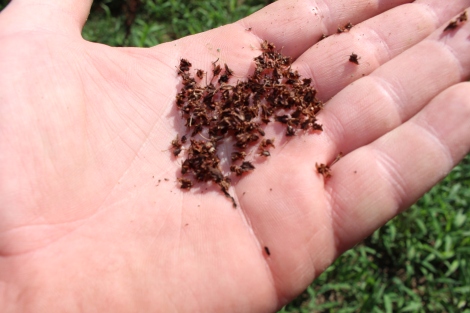 Wash the root ball with a high pressure hose to remove the remaining soil. Discard any root that shows sign of rot or damage. The root has a brown woody sheath with a yellow center. The more yellow the center, the more concentrated the good stuff becomes.

Albert’s instructions for making his decoction (tea) is simple. Place the roots in a pot, cover with water, and boil. You want to bring the pot to a boil and then reduce the heat to a simmer for about 30 minutes in a covered pot. A decoction usually requires that you boil the liquid down to concentrated levels. Not so with this method. Simmering for only 30 minutes and removing from heat will prevent most of the liquid from evaporating.

I used my outside kitchen for this process. I wasn’t sure if there would be a lingering scent in DRG’s kitchen during the processing. The root has an earthy smell which was not offensive to me when boiled. 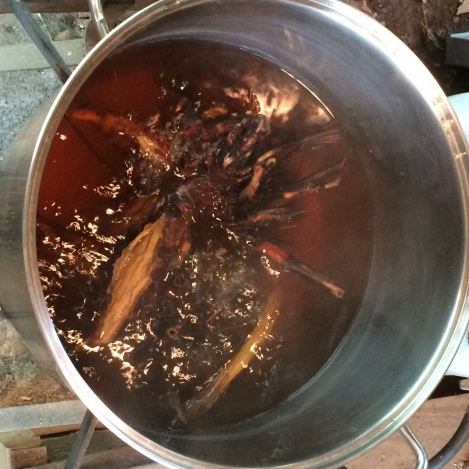 The roots were mushy after 30 minutes. You may notice the brown outer sheath split revealing the stringy root fibers on the far left.

The consistency of the root will turn mushy and stringy like a baked sweet potato after 30 minutes of simmering. Remove from heat and allow the covered decoction to steep for several hours. I went about my day and returned after 8 hours.

Remove the large mushy roots and strain the remaining liquid through cheese cloth to collect the smaller bits. Pour into covered containers which will fit into your refrigerator to reduce the chance of spoilage.

You may want to add honey to sweeten your tea. As Albert told me, “It ain’t gonna taste good, but it’s good for you.” He was certainly right about the taste! 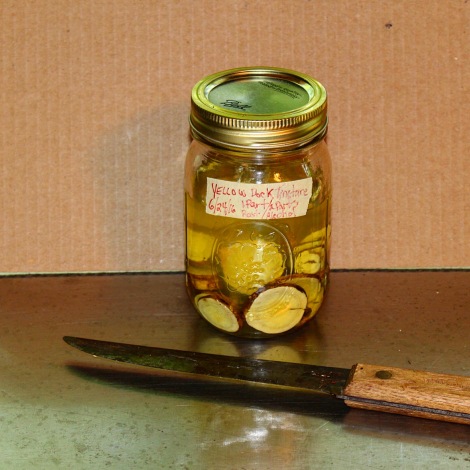 Thinly slice or grate enough root to create a 1:2 ratio of root to grain alcohol. I used a scale to keep the proportions even by weight. I ended up with 3.1 ounces of root to just over 6 ounces of alcohol. Vinegar can be substituted for alcohol.

Place the root material in a mason jar and pour the liquid over. Seal the jar and store it in a cool location. My jar is on the kitchen counter to remind me to shake it daily on the 6 to 8 week period to becoming a medicinal tincture. Label the jar with the date of production, the ratio used, and the type of tincture.

Dosage from respected herbalist recommend 5-20 drops once or twice a day. Do your own due diligence.

Below are some of the more helpful articles I read in my research:

11 thoughts on “How to Harvest, Prepare, and Use Yellow Dock Root Medicinally”