I catch hell and get crazy looks when I tell my male friends that I’m on Pinterest.

Yep, there’s lots of estrogen induced pinning going on. But, guys, I’ve found Pinterest to be a great tool for preparedness and self-reliance. 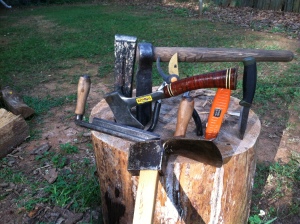 There are lots of manly Pins that will stoke the fire of preparedness and self-reliance for anyone interested. In fact, it’s quite likely that your favorite prepared blogger has an active board full of value-adding pins. Whatever you’re into – prepping, survival, self-sufficiency, homesteading, DiY, bushcrafting, pioneer skills, guns, hunting/fishing, tools, permaculture, fitness – you’ll find it on Pinterest.

One cool thing about this social media tool is that your pins don’t disappear into the ether like Facebook or Twitter. What you pin on your board(s) stays there for future reference. My Pinterest boards serve as my Doing the Stuff refrigerator where I pin “fridge worthy” stuff I’m working on.

One preparedness project I found and finished yesterday is the self-feeding battery storage unit below. I was dressed for a hunting trip and my truck wouldn’t start. So I salvaged the day by heading to my shop to build preparedness stuff! 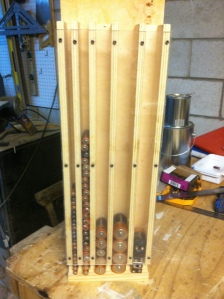 Power at your finger tips

From left to right are the most common batteries: AAA, AA, C, D, and 9V batteries are ready for use and in one place. You can find the plans on my DIY Preparedness Project Board. I modified my battery storage unit by making it 21 inches tall instead of the original 8 inches to accommodate a Prepper load of batteries.

It beats my old scattered drawer storage method. There are 23 AA batteries in the slot with room for at least a dozen more.

When DRG or I need a battery, we can easily pull one from the self-feeding rack.

Alright manly men, before dismissing Pinterest as a girly hangout, you need to head over to Pinterest and Pin some preps!

While you’re there, you can follow your’s truly and some of my recommended preparedness pinners:

These are just a few of the folks I’ve got pinned to my Doing the Stuff internet fridge. Add your favorites in the comments.

Thanks for sharing the stuff!

Copyright Information: Content on this site (unless the work of a third-party) may be shared freely in digital form, in part or whole, for non-commercial use with a link back to this site crediting the author. If you are interested a third-party article, please contact the author directly for republishing information.

Every Boy Should Own A Knife

Posted on September 25, 2012 by Survival Sherpa

[SS Note: As a fellow educator, I can relate to the author’s experience of not only carrying a knife in a public school, but actually using it like any other tool. If you were fortunate enough to go to attend school before the nanny state took over public education, an Old Timer or Case pen knife was in the pocket of most of the boys and some girls. The tool was used for sharpening pencils, slicing apples, and removing splinters from climbing trees to avoid catching cooties from the girls. Oh well, those days are gone… for now.]

This article is posted with permission from Ed That Matters by Todd Sepulveda. Please visit his other site, Prepper Website, for more great preparedness information. Also, be sure to download his free eBook, Education After The Collapse.

Every man should own a knife.  And every man should receive his first knife when he is a young boy.  At this moment, I can hear every man saying, “darn right!”  I can also hear every woman screaming?!?  Women (not every woman) tend to freak out over knives (story below).  But knives are simply tools. TOOLS!  Let me say that again, a knife is a TOOL!

Side story  – A few weeks back I pulled out my Boker to open up a box that was taped up.  The four women teachers around me freaked out and all backed up like I was about to stab them in the neck or something.  After pressing them, 3 of the 4 admitted that their husbands carry a knife too.  Their response is just typical of how we have vilified TOOLS.  TOOLS PEOPLE!  IMPORTANT TOOLS!

The thing to remember is that with everything (and I mean everything), boys need to be taught about knives and how to use them appropriately.  But handing a kid a knife also provides a parent with the opportunity to teach responsibility, respect and sets them on the road for what they are hardwired for, being a man!

Responsibility – Boys needs to learn responsibility.  If not, they won’t know the value of things.  Boys could choose to be irresponsible.  When they are irresponsible, it should be viewed as a teachable moment.  For instance, my son has a knife that he purchased at a gun show.  He really likes it.  But one time he left it just laying around – he didn’t value it enough to put it in its place, he was irresponsible.  I conveniently picked it up and put it in “my” place.  Later, when he realized he couldn’t find it, he came to me to let me know.  I used that time to teach how important it is to be responsible.  If he didn’t know where his knife was, he wouldn’t have it when he needed it.  It is up to the parents to show and express value in important items and teach responsibility.

How does one teach respect?  Touching a hot grill will teach you a little respect when dad’s bbq’ing. But that is learning the hard way.  Kids need to respect and trust their parents in order to respect what their parents say, that is a whole different post.  But hopefully it suffices to say, respect rises with a good relationship.  You can’t have one without the other.

Manhood – Men are hardwired to kill their food and bring it home to their families.  In the past 30 plus years, there seems to have been a huge effort to wussify boys (recall the story above when I pulled out my Boker).  Boys are going to gravitate to boy things, be rough, play cops and robbers or cowboys and Indians and get muddy.  Let boys be boys!

I’m glad that I can be there at school to run interferences with young elementary boys when they draw a picture of a gun fight or make a paper gun.  Yes, there needs to be wisdom, but come on!  That young deaf boy, who recently was told that he couldn’t sign his name because he had to sign a letter that looked like a gun was not wisdom!  Those educators are idiots!  It wouldn’t have happened if I was there!

Having a knife won’t make a boy a man, but it does signify what every man was hardwired to do.

What do I carry – Because I work in an elementary school, I carry a Boker Plus Urban Survival Knife.  This is not a bushcraft knife or  one that you would use to cut wood for whatever reason.  This is purely a self-defense weapon.  It works for me in this setting because the top looks like a pen cap.  It also comes with another cap that will break glass if you want that option.  It has studs to flip it open, but it does take practice; I’ve become pretty quick with it.  The end also has sort of a hook that can be pressed into someone when pressure is placed with the thumb.

You can purchase  the Boker Plus Urban Survival Knife on Amazon.  Take the negative reviews with a grain of salt.  Again, this isn’t a bushcraft knife.

Side Note – I recently linked to an article by Sigma 3 Survival about knife fighting practice on my other website – Prepper Website.

When I’m not at school/work, I carry a Kershaw Shallot.

So what do you think?  Feel free to leave a comment.